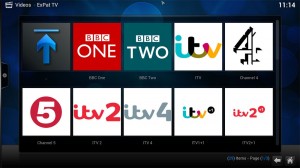 Just a quick update as I noticed that I had not included the TV channels that are available live via ExpatTV on the xbmc programme.

Basically you get the main terrestrial channels which are as follows

Apart from these via other plugins and a bit of searching you can find most channels live including some of the Irish channels too.

On top of this most series can be found using Mash Up TV or 1 channel, in fact recently I managed to find the series Orphan Black, plus the episodes which had not even aired yet on the BBC