Yes a strange statement if you live in the UK, but as an expat living in Spain or any country then I suspect you will understand. We have been living here for 9 years and with my wife being Spanish and my daughters bilingual then we tend to watch the TV in Spanish, which is fine but there is only so much you can take of game shows. 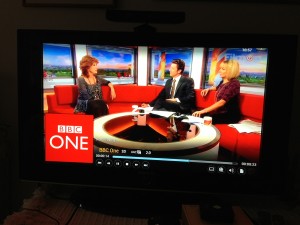 BBC Iplayer on your TV

So about 4 years ago I discovered the BBC iplayer and the proxy and I then found myself in the office for what feels like 24 hrs a day. I did try to persuade them to watch the great BBC documentaries but there was no convincing the girls, I suppose this is the youth of today. I cannot understand it I loved to watch David Attenborough when I was young.

So when Ray a fellow expat suggested I try one of these new TV boxes he had configured for me for the Iplayer and live UK TV , I thought why not. Oh my god I did not expect the effect it was going to have on me or the family, finally I felt included once again.

As a result I said to Ray that I am sure my fellow expat friends who use the proxy would love this too (I say friends as after 4 years there is more than a customer relationship these days. I like to think that maybe it is the Chocolate that I get sent now and again or the those who sponsor my odd race that makes it feel that way) So these last few days we have been configuring set top boxes, which have started to arrive.

What has really pleased me is the response from our first customer Mike, which I will quote below as it is more or less my reaction.

Hi Stephen – This Box is a fantastic piece of equipment – All working well, and I find new features  every time I switch on.

Then a little later he says

This machine gets better every time I use it.

It is difficult to explain why one would have this reaction, but to try to give you an idea it is not just the fact you can now watch the TV on your TV, but you get the iplayer and then you find you can stream virtually any movie in HD or TV series for free.

So then this weekend I wanted to see if I could watch any of the football over the weekend, with my surprise every game was available in the premiership also the England game with Poland was on ITV. OK some of the stream quality was not brilliant and took a little bit of time to find, but if you struggled the next day there was a chance you could watch the full game in HD.

OK I have to add a warning here as these streams are illegal, so I have to say that I am not responsible for what you decide to use your box for, but what I will say is that as an expat we have no choice. I think most of us would love to pay our TV licence and watch the BBC and the same goes with SKY to a lesser extent, but we cannot so as a result we have to resort to slightly different route to be able to have a resemblance of normality in our chosen country.

If you want to know more then details on how to watch the iplayer on your TV can be found here.